The Mosque City of Bagerhat is a formerly lost city situated in the outskirts of Bagerhat, at the meeting point of the Ganges and Brahmaputra rivers. This ancient city, formerly known as Khalifatabad, according to numismatics, was founded by the warrior saint Turkish general Ulugh Khan Jahan in the 15th century. It was a vast, prosperous city and administrative headquarters once upon a time on this swampy and marshy area. This historic city, listed in Forbes Magazine as one of the 15 lost cities in the world, has more than 50 Islamic monuments in the distinct Bengal variant of Indo-Islamic architecture. This site was declared as a UNESCO world heritage site in 1983. There are 7,815 mosques, 238 temples, and 17 churches in this city. The main attraction is the Sixty Dome Mosque (Shait Gambuj Mosque). Apart from the Sixty Dome Mosque, the other buildings including Khan Jahan Mausoleum, Nine Dome Mosque, Singair Mosque, Bibi Begni Mosque, Chunakhola Mosque, Ronobijoypur Mosque, Kodla Math (Ajodha Moth), Ghora Dighi, and Majar Dighi (Thakur Dighi) are remarkable.

So if you are a nature lover and want to come closer to the heavenly beauty which is bestowed by its divine nature and explore the medieval mosque city after sailing on the antique Paddle Wheel Rocket Steamer then this is the best tour for you.

09:00 – 09:00 AM: We will pick you up from your hotel. Drive to Old Dhaka
09:30 – 10:00 AM: Have a look at National Parliament House (Jatiya Sangsad Bhaban) from outside, which is the biggest legislative building in the world designed by American architect Louis Kahn. This building won the Fourth Aga Khan Award in 1989.
11:00 – 11:30 PM: Visit Dhakeshwari Temple the oldest (built-in 12th century) and sacred Hindu temple in our country, this is the most significant temple because many historians believe that the name of Dhaka could have emerged from this temple. Now it’s been serving as the national temple of our country.
11:40 – 12:00 PM: Visit Khan Mohammad Mridha Mosque built in the Mughal period. The founder of the mosque could have been the architect himself.
12:10 – 01:10 PM: Visit Lalbagh Fort (Fort Aurangabad) which is the main tourist attraction in Old Dhaka for local visitors as well as foreign tourists. This is an unfinished fort built in the 17th century by Prince Azam who was the second son of Emperor Aurangzeb
01:15 – 02:15 PM: Lunch in a local restaurant (taste authentic Bangladeshi traditional dishes)
03:00 – 03:40 PM: Take a Rickshaw to visit Star Mosque (Tara Masjid) this is the most beautiful mosque in Old Dhaka, the mosque has ornate designs which is decorated with thousands of motifs blue stars. Also, visit Armenian Church the Holy of Resurrection built in the 18th century by Armenian traders.
03:45 – 04:00 PM: Walk-through Islampur Cloth Market the biggest clothes market in our country. This market started in the British period with few shops. In the Pakistan period, this market expanded step by step. After the independence of Bangladesh, this cloth market becomes the biggest cloth market in our country.
04:00 – 04:40 PM: Visit Ahsan Manzil (Pink Place), it has been designated as a Museum now but it was the residential place of the Nawab family.
04:45 – 05:45 PM: Sadarghat (main river terminal) is the main river station in Dhaka, this river port is mainly used by the southern people of Bangladesh and this is the cheapest and easiest way to travel from Dhaka to the Southern part of our country close to the coastal area. All the passenger ferries (locally call launch) leave in the evening towards the greater Barisal Division. Take a boat ride with a wooden pushing boat run by oar and you will see here the vibrancy of the river which is full of activities. People normally use these small wooden boats only to cross the river to avoid long-distance travel or bad traffic congestion.
05:50 – 06:00 PM: Embark on the Paddle Rocket Steamer and leave your bags in the cabin, come out and enjoy the evening beauty of Buriganga River.
Overnight at Rocket (Air Conditioned Sleeping Cabin)

06:00 – 08:30 AM Early in the morning enjoy the divine beauty of the riverside. Breakfast in Rocket or a local restaurant.
09:30 – 10:00 AM Disembark from Rocket at Hularhat around 10:00 AM and head off towards Mosque City Bagerhat (Khalifatabad).
11:00 – 11:30 AM Visit Koldla Moth (Ajodha Moth), is one of the remarkable examples of Sikhara types temples, as it looks like a pyramid so many archeologists say, it may be the tomb of some great man. The façade treatment and decoration of the Kodla Matha is one of the main attractions of the temple. It is presumed that the builder of the moth was a Brahman in the 17th century.
12:00 – 12:30 PM Visit Ronovijoypur Mosque, This is the biggest single dome mosque in Bangladesh. It is 11 meters (36 ft) wide supported by arches and pendentives. The interior design is plain but exterior corners have tapering circular turrets while the external cornice has a slight curve.
12:45 – 01:15 PM Visit Khan Jahan Ali Shrine (Mazar) – Khan Jahan Ali died on 25 October in 1459, His tomb was preserved here it is now serving as a pilgrimage site where peoples pay attention to their tributes towards this mausoleum who dedicated his life to building the city and its monuments. Also visit Majar Dighi (Thakur Dighi), and Nine Dome Mosque
01:30 – 2.30 PM Lunch in a local restaurant (taste authentic Bangladeshi traditional dishes)
02:40 – 3.20 PM Visit Bibi Begni Mosque- this mosque is still another traditional single domed mosque in Bangladesh which is built massively with 9’-9’’ thick walls. Local people believe that Bibi Begani could have one of the wives of Khan Jahan Ali while others believe she was a concubine of him. Chunakhola Mosque- This bulbous mosque is located in a lush paddy field that gives it a fairy-tale-like setting. Chunakhola mosque is also the single domed square type of Sultani mosque built at the same time as another mosque in this area in the 15th century. It has also massive thick walls of 2.24 meters (7′-4”).
03:30 – 4.30 PM Visit Singair Mosque- Singair mosque located across the road from 60 dome mosque on its southern side. It has a single dome which is heavily built and a wide dome. The measure of each side is 39 feet 6 inches this mosque was also built in the same century but a bit later than 60 domes. This mosque has some terracotta decoration on it. Bagerhat Museum- the museum is located in front of the sixty dome mosque, where antiquaries collected from the area of the historical site are displayed providing knowledge on the history of Bagerhat. The main attraction is the legendary crocodile’s skin that once lived in Thakur Dighi (Majar Dighi).
Sixty Dome Mosque- This is the largest Sultanate mosque in Bangladesh and one of the most impressive Muslim monuments in the whole of the Indian subcontinent. This historic mosque represents the Golden Era of Muslim Bengal. This mosque is unique as it has 60 pillars that support 77 exquisitely curved ‘low squat domes’. Sixty Dome Mosque was built in 1440 by Turkish saint general Khan Jahan Ali. This site has been declared as a UNESCO world heritage site in 1983 under the criteria (iv).
05:30 – 5.45 PM After visiting all of the sites drive towards Khulna for an hour
Overnight at Khulna (City Inn)

07:00 – 07:30 AM Pick up from your hotel and transfer to the railway station. Walk around the railway station and get the experience of a Bangladeshi train and train station. Get on the first-class AC compartment called Snigdha.
08:40 – 05:40 PM Our nine-hour train journey will start at 08:40 AM from Khulna Railway Station to Dhaka. From the train you can expect to see vast vegetation beauty in the countryside, different types of harvest fields, a lot of mango orchards, litchi orchards and other orchards as well the longest steel railway bridge in Bangladesh (Hardinge Bridge) and 6th longest bridge in South Asia (Bangabandhu Bridge) which is 4.63 km long. You will also notice many local people and their daily life activities.
06:00 – 07:00 PM Transfer to your hotel and say goodbye. End the Rocket Steamer Tour to Bagerhat.
06:00 – 07:00 PM Transfer to your hotel and say goodbye.
End Rocket Steamer to Bagerhat Tour. 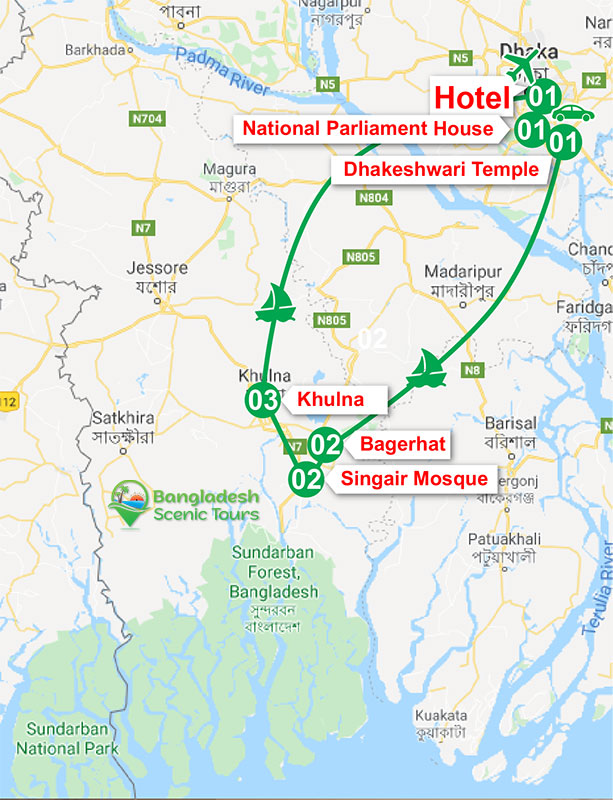