It is said that Gautama Buddha once came to this region to spread Buddhism. Because of its geographical location since ancient times the entire region of Bengal, including the Somapura Mahavihara has become one of the vital links between India and Southeast Asia. According to the numismatics Sompur Buddhist Bihar was built in the 8th century by the second Pala king Dharmapala (781-821 AD) of the Pala Empire. This Great Monastery was a renowned intellectual center until the 17th century. The monastery is distinguished by its unique artistic achievement. The terracotta plaques of musicians, snake charmers, and animals decorate the outer walls of the temple depicting the life of common people who lived a thousand years ago. In addition to a large number of Stupas and shrines of various sizes and shapes, terracotta plaques, stone sculptures, inscriptions, coins, ceramics and many more have been discovered during excavation. It was designated as a UNESCO World Heritage Site in 1985.

Mahasthangarh (Mohasthangor) was the provincial capital from the mighty Maurya, Gupta to the Sena dynasty period. It represents the earliest and the largest archaeological site in Bangladesh consists of the ruins of the ancient city of Pundranagara. The city was probably founded by the Maurya Empire in the 3rd century BC. Many travelers, archeologists, and scholars like Chinese pilgrim Xuanzang (Hiuen Tsang) visited this affluent city in the 7th century AD. Later Francis Buchanan Hamilton (a Scottish geographer), O’Donnell, Westmacott, William Beveridge, and Sir Alexander Cunningham visited this site and mentioned it in their reports. Various monasteries are scattered throughout the vast area outside of the main citadel. Among them, Govinda Bhita, Bairagir Bhita, Khodar Pathar Bhita, Parasuram Palace, Godaibari Dhap, Noropotir Dhap, Gokul Medh (Lokhindorer Bashor Ghor), Bhasu Bihar (Narapatir Dhap) are the most significant and remarkable sites.

Pick up from your Hotel is around 07:00 AM! Drive through the beautiful landscape to Bogra and see the different geography of Bangladesh. On the way, we could stop at interesting places and have a look around. You also can have a cup of tea and stretch your legs, shoulders, and neck.
Lunch in a highway restaurant on the way (Food Village). Visit Kherua Mosque, the combination of Sultani architecture and Mughal architecture built in 1582 AD by Nawab Mirza Murad Khan more than 440 years ago.
Drive towards your hotel, upon arrival check-in, freshen up, take some rest and get ready to explore the ancient city Mahasthangarh. all major attractions of Mahasthangarh according to your interest including Museum, Citadel, Govinda Bhita, Bairagir Bhita, Khodar Pathar Bhita, Parasuram Palace, Godaibari Dhap, Noropotir Dhap, Gokul Medh (Lokhindorer Bashor Ghor), Bhasu Bihar (Narapatir Dhap)
Back to your hotel
Overnight at Bogra (Hotel Naz Garden)

Pick up from your Hotel and drive to the Buddhist Monastery at Paharpur, Badalgachhi, Naogaon.
Visit Somapura Mahavihara, the most famous Buddhist monastery of ancient Bengal. This is the most significant and best-known Buddhist monastery among all Buddhist monasteries in the Indian subcontinent. Built in the 8th century AD by the second Pala Ruler Dharmapala (c 781-821 AD) it was designated as a UNESCO World Heritage Site in 1985. Lunch in a local restaurant or a guest house in Paharpur (authentic Bengal food)
Drive back to Bogra, on the way we back we will visit a village market to see the villagers’ activity and how they sell and buy their goods in an open field market.
Overnight at Bogra (Hotel Naz Garden)

Day 3
Day-03: Visit Some River Islands and Back to Dhaka

After having breakfast drive to Sariakandi for Kalitola Ghat (35 kilometers)
Visit some Chars (river islands) to see how the isolated people struggle against natural disasters – especially floods and drought.
Drive back to Dhaka. On the way stop at interesting places along the way and have a look. Lunch in a highway restaurant on the way (Food Village). having Lunch again starts our journey to Dhaka.
Arrive in Dhaka in the evening, transfer you to your hotel and say goodbye. End Ancient Civilization Tour. 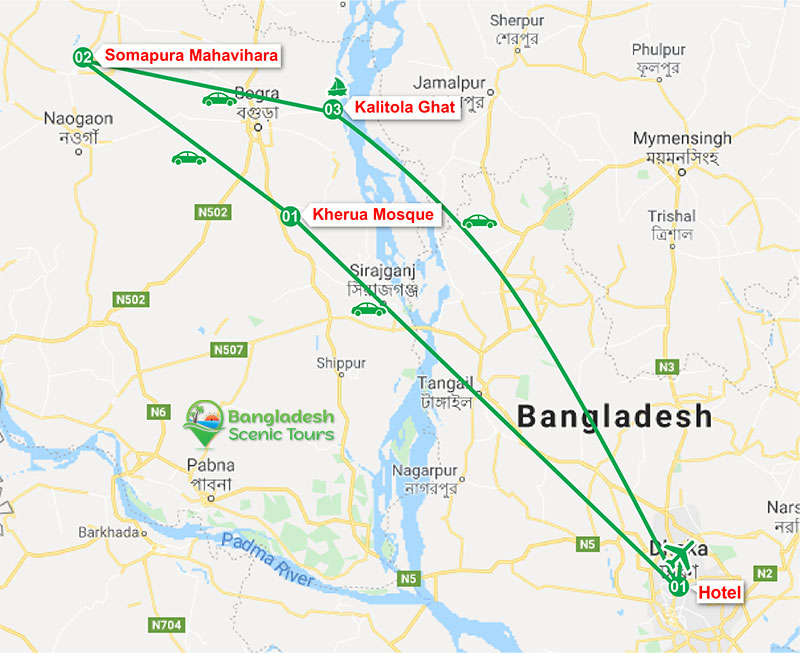