Bishwa Ijtema is the second largest Muslim congregation in the world. More than Two Million Muslims from 150 countries joined together in prayers on the final day of the Bishwa Ijtema festival in Bangladesh. Biswa Ijtema means world congregation. It is one of the largest peaceful gatherings in the Muslim world after Hajj (pilgrimage to Mecca). The Ijtema is a prayer meeting spread over three days, during which attending devotees perform daily prayers while listening to Islamic scholars reciting and explaining verses from the holy Quran and Hadith.

The Ijtema is considered to be demonstrated of Muslim unity, harmony, mutual love and respect, and an opportunity to reiterate their commitment to Islamic values, norms, and ideology for all Muslim communities in the world. This festival is held in two phases every year in January. The first phase is allowed for devotees from 32 designated Bangladeshi districts. The second phase allows the rest of the devotees from the remaining districts of the country. Foreign devotees are allowed in both segments.

Day 2
Day-02: Visit Ijtema Festival Grounds and Roam Around Their

Pick up around 10 ‘o’clock, Drive to Ijtema Festival Grounds
Walk around and photoshoots
Lunch in a local restaurant (taste authentic Bangladeshi traditional dishes)
Drive back to your hotel

Pick up early in the morning and drive to the festival ground, Enjoy the Culmination of Akheri Munajat
Photoshoots in the most crowded area near the railway station.
Lunch in a local restaurant (taste authentic Bangladeshi traditional dishes)
Drive back to your hotel and say goodbye. End the Bishwa Ijtema Tour 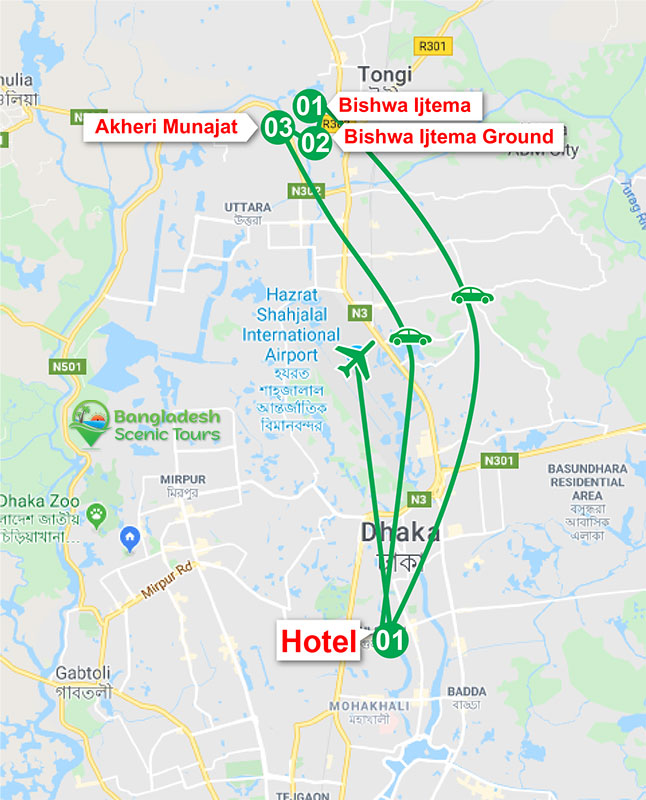