Bangladesh is the largest river delta in the world. It is heir to a rich cultural legacy despite the various destructive activities of nature and man. If we look back two thousand five hundred years ago to the streams of history, we find many splendid cities, magnificent palaces, and buildings, temples, stupas, mosques, and mausoleums erected by various rulers and settlers of this country. Particularly the Northern part of our country is significantly rich with its archaeological wealth and treasures. According to numismatics we have recorded history for different archaeological sites beginning in the 7th century BC (Iron Age). We had Buddhist, Hindu, and Muslim dynasties and they made some great archaeological contributions.

In this tour, we will show you all major impressive archaeological sites in North Bengal, including Mahasthangarh (Mohasthangor) Somapura, The first mosque in Bangladesh called Harano Masjid (Lost Mosque) was built in AH 69, 7th century, along with lots of beautiful medieval mosques, terracotta temples, stupas, mausoleums. If you are an archaeology lover and want to come closer to the heavenly beauty of the countryside then this could be the best tour for you.

Pick up from your Hotel at 06:00 AM! Drive to the Airport Railway Station, board the train and start your journey at 06:32 AM.
On the way, you will see vast vegetation beauty in the countryside, different types of harvest fields, a lot of mango orchards, litchi orchards, and other orchards as well and you will see the 6th longest bridge in South Asia (Bangabandhu Bridge) which is 4.63 km long, and you will notice many local people and their daily life activities.
Our driver is waiting to pick you up from Rajshahi railway station, and transfer you to your hotel, upon arrival, check-in, freshen up, take your lunch, have some rest, and replenish your stamina.
Visit the Varendra Research Museum. It is considered the first museum in Bangladesh which was established in East Bengal in 1910. Here you will see many archaeological artifacts including lots of Hindu and Buddhist stone sculptures, old Sanskrit, Arabic, and Persian scripts, stone inscriptions from different times, and so on. Depending on the season and day time if there is enough time then we will have a boat ride on the mighty river Padma (Ganges)
Overnight at Rajshahi (Hotel Nice International)

Pick up from your Hotel and drive to the ancient Bengal capital Goura or Gour city. Gaur city was a thriving and affluent administrative headquarter from the 9th century to the 16th century. Due to the partition of 1947 two-thirds of Gaur city is now situated in the Malda district of West Bengal, India while a smaller part is located in the Bangladesh side in Nawabganj District.
Visit Choto Sona Mosque (Small Golden Mosque). This mosque was built during the reign of Alauddin Husain Shah between 1493 and 1519. These fifteen domes of the mosque once were gilded so it’s called Choto Shona Masjid (Small Golden Mosque).
If it is the Mango season (May-August) then visit some mango orchards and Bazaar; this is a great chance to taste yummy and best quality mangoes. This area is called The Mango Capital of Bangladesh. And if it is not mango Season then travel directly to the Tohakhana Complex. Here you will visit Sah Niamatullah Masjid and Shah Neyamotulla’s Shrine.
Visit Darasbari Mosque which was built in 1479 AD by Shamsuddin Yusuf Shah and visit Darasbari Madrasa (Chollis Ghor). This religious institution was built at the same time as the mosque following the Somapura Mahavihara style.
PM Visit Khania Dighi Mosque, Chamchika Mosque and Dhunichak mosque.
PM Drive back to Rajshahi in the evening, if you wish you can have dinner downtown before going back to your hotel
Overnight at Rajshahi (Hotel Nice International)

After having breakfast drive one and a half hours to Bagha, 44 kilometers away from Rajshahi.
Visit Bagha Shahi Masjid (Bagha Grand Mosque). According to its stone inscription, the mosque was constructed in 1523 by Sultan Nasiruddin Nasrat Shah. This mosque is considered the epitome of Islamic terracotta ornamentation. The entire mosque wall- both interior and exterior- is covered with an elaborate depiction of exquisite floral patterns, abstract fretwork, and geometric patterns.
Drive 40 minutes to the temple village Puthia (20 kilometers). Visit the largest number of historic temples in Bangladesh which is consists of a cluster of notable old Hindu temples built during the British reign early of the 19th century. You will visit Pancharatna Gobinda Temple (This temple has exquisite terracotta ornamentation depicting the divine romance between Krishna and Radha), Bhubaneshwar Shiva Temple (the largest Shiva temple in Bangladesh which is built in the five spires or Pancha Ratna style and it has a large black basalt Shiva Lingam), Bara Ahnik Mandir (It has a highly adorned eastern facade with terracotta plaques and some of them are stated to be in dilapidated condition, its consist of three chambers, Dochala in the center and attached two Chauchala in its north and south side). Here you will see some other temples including Gopal Temple, Rath Mandir, Dol Mandir, Puthia Rajbari. to Natore for Lunch, Natore Rajbari, and Uttara Ganabhaban (17 Kilometers) Lunch in a local restaurant and taste the nationally famous dessert called Kachagolla.
Visit Natore Rajbari also known as Pagla Raja’s Palace. It was a prominent royal palace in Natore and a residential palace for the Rajshahi Raj family.
Visit Uttara Gonobhaban. It was built in 1734 by Raja Doyaram who was the Dewan (like minister) of Rani Bhabani. Once it was his royal palace and now it’s functioning as the provisional official residence of the head of government in the northern region of Bangladesh. Drive back to your hotel in Rajshahi.
Overnight at Rajshahi (Hotel Nice International)

After having breakfast drive one and a half hours to Kusumba village 47 kilometers away from Rajshahi. Visit Kusumba Mosque. This mosque is also known as Kala Pahar or Kala Rotno which means Black Pearl because of its black stone built in 966 AH (1558-59 AD) during the last Afghan Suri ruler Ghiyasuddin Bahadur Shah. Start driving for an hour and forty-five minutes to Paharpur to visit Somapura Mahavihara (55 kilometers).
Visit Somapura Mahavihara. It was the most famous Buddhist monastery of ancient Bengal. This is the most significant and best-known Buddhist monastery among all Buddhist monasteries in the Indian subcontinent. Built-in the 8th century AD by the second Pala Ruler Dharmapala (c 781-821 AD) it was designated as a UNESCO World Heritage Site in 1985. Lunch in a local restaurant or a guest house in Paharpur (authentic Bengal food)
Start driving an hour and forty-five minutes to Mahasthangarh (52 kilometers). On the way, we will visit a Village Market and see the villager’s activity and how they sell and buy their goods in an open field market. Visit all major attractions of Mahasthangarh according to your interest including Museum, Citadel, Govinda Bhita, Bairagir Bhita, Khodar Pathar Bhita, Parasuram Palace, Godaibari Dhap, Noropotir Dhap, Gokul Medh (Lokhindorer Bashor Ghor), Bhasu Vihara (Narapatir Dhap) Overnight at Bogra (Hotel Naz Garden)

After breakfast drive about 2.5 hours to Rangpur (106 kilometers). On the way, we could stop at interesting places and have a look around. You also can have a cup of tea and stretch your legs, shoulders, and neck.
Visit Tajhat Palace (Tajhat Rajbari). This is a historic place and one of the finest Rajbaris in Bangladesh situated in the northern part of our country and built in the 19th century by the feudal landlord Manna Lal Ray. Visit Dimla Kali Mandir.
In the afternoon visit Harano Masjid (Lost Mosque), built-in 69 Hijri of the Arabic calendar (690 AD) during the presidency of “Abd al-Malik ibn Marwan”, who was the 5th caliph of the Umayyad Caliphate. Many historians and Islamic scholars believe this mosque is the first mosque in Bangladesh and one of the oldest mosques in South Asia.
Overnight at Rangpur (Hotel North View or CASPIA the Home)

Visit Kantajew Temple, the most beautiful and stunning terracotta Hindu temple in Bangladesh. It is gained distinction as an outstanding monument in Bangladesh for its fabulous terracotta embellishment. It records that Maharaja Pran Nath of Dinajpur began its construction around 1722. This temple is called Nava-Ratna or (nine-spired) Hindu temple but unfortunately, all nine spires were destroyed by a devastating earthquake in 1897. Every inch of it has a decoration with beautiful plaques which is described as the epic story of Hinduism. Nayabad Mosque, This historic mosque is situated on the bank of the moribund river Dhepa. According to its inscription at the doorway, the mosque was built in 1793 AD. Villagers believe this mosque was built by Kalu Khan who was supposed to be the main architect of the Kantajew temple.

Drive to Saidpur Airport to catch the flight to Dhaka around 4:30 pm.

After arrival in Dhaka transfer you to your hotel. End the tour 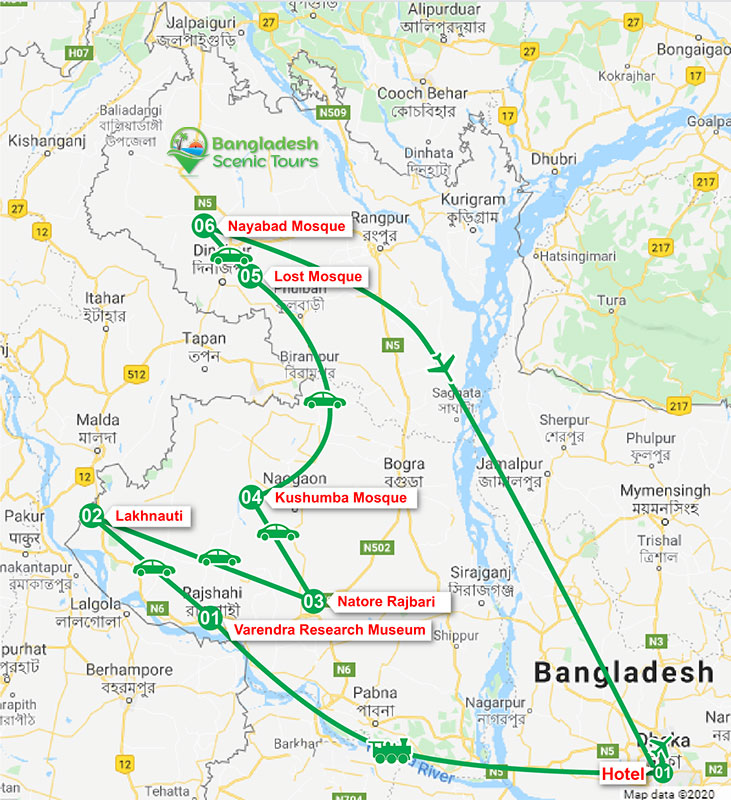