Barisal is one of the most beautiful destinations in southern Bangladesh. It’s called ‘the Venice of Bengal’ for its beauty. There is another saying that, ‘Rice, Canals, and Rivers make Barisal’. Ralph Fitch, a leather merchant and the first-ever Englishman known to have visited Bengal in the mid-1580s, described Barisal in his journal as, ‘Bacola’ (locally known as Bakla). Every year Barisal attracts domestic as well as international tourists in large numbers. All the rivers, canals, and creeks spread out like a network. Barisal Backwater Tour gives you a chance to explore the most beautiful regions in Barisal by cruising the backwaters of Swarupkathi.

This is heaven for Guava orchards, Hog Plum, Coconut, Palm trees, and floating market (where goods are sold from boats to customers on the river). Numerous exclusive species of aquatic life such as crabs, frogs and mud-skippers, water birds including terns, kingfishers, cormorants, and many more live in Barisal. Various leafy plants and bushes grow alongside the backwaters, providing a great scenic view of the countryside that will soothe your eyes.

Pick up from your Hotel in the late afternoon and drive to Sadarghat. Embark on the Paddle Rocket Steamer. Leave your bags in the cabin, come out and enjoy the evening beauty of the Buriganga River.
Overnight on the Rocket Steamer (Sleeping Cabin)

Disembark in Barisal early in the morning around 6 am and transfer to your hotel.
After check-in and freshen up a drive to Banaripara by Tuk-Tuk for an hour. After arrival embark on our waiting boat and start immediately towards the floating market (floating market depends on the days and time)
Breakfast will be served on the boat, the whole day you will cruise on small canals and creeks. Enjoy a charming view of the countryside, visit some village markets and the coconut shell factory.
Lunch will be served on the boat – basically some different types of seasonal fruits. Tea and coffee will be ready always on the boat.
In the late afternoon, we will return to your hotel. In the evening for dinner, we will enjoy authentic Bengali dishes at a local restaurant.
Overnight at Barisal (Hotel Arena)

Early morning around 7:00 AM drive to Swarupkathi. Upon arrival start cruising immediately. Visit the biggest Log Markets in our country. Also, visit sawmills and see how workers work efficiently but without any protection.
Lunch will be served on the boat in the same style as yesterday. Visit rural areas and some guava orchards, hog plum orchards, and a rural primary school. If you bring some candies for the children they will be extremely happy.
Return to Barisal and transfer to your hotel. Freshen up and get ready to depart to the river station. Embark on the passenger ferry. Leave your bags in your cabin and enjoy the evening beauty of the Kirtankhola River.
Overnight on the Rocket Steamer (Sleeping Cabin)

Overnight on the passenger ferry (Launch) in a sleeping cabin.
Arrive in Dhaka early in the morning, transfer you to your hotel, and say goodbye.
End the Barisal Backwater Tour. 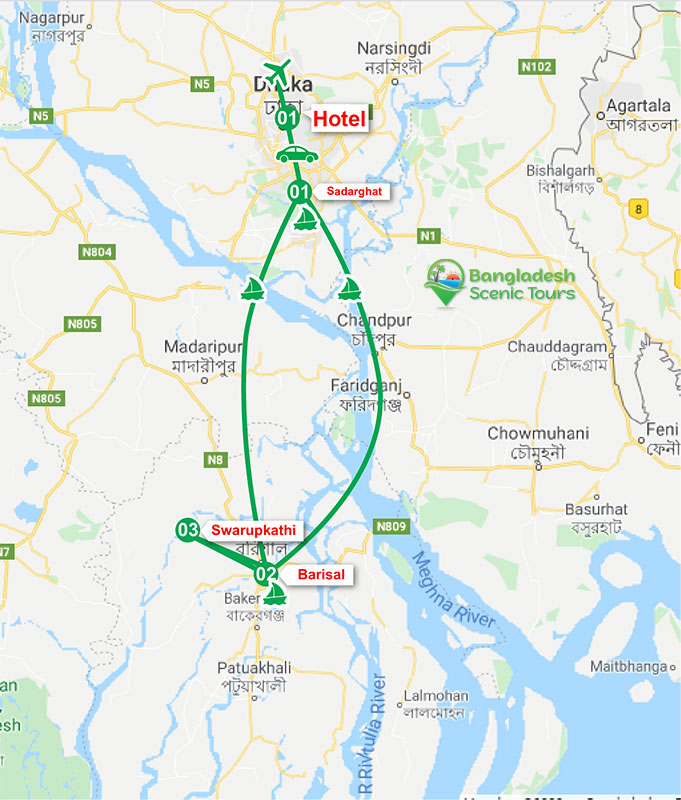