The Chittagong Hill Tracts is topographically the only hill-intensive area of Bangladesh. It is situated in the southeast of Bangladesh. The inhabitants of the Hill Tracts are mostly tribal. The life of the tribal people is extremely fascinating. The mountainous rugged terrain with deep forests, lakes, and falls gives it a divergent character from the rest of Bangladesh.

In the Chittagong Hill Tracts, the Upper Tertiary sandy-argillaceous sediments have been folded into a series of long sub-meridional anticlines and synclines represented in the surface topography by elongated hill ranges and intervening valleys

We have designed this impressive tour for those who love the most spectacular greenery and hilly area of Bangladesh!

A guide will meet you inside the airport, welcome you to Bangladesh, and transfer you to your hotel
Overnight at Dhaka (Hotel Civic Inn)

We visit the famous historic sites of New and Old Dhaka including the outside of the National Parliament House, Dhakeswari Temple, Lalbagh Fort, Star Mosque, Armenian Church, Pink Place, and Hindu Street, including a rickshaw rides through the narrow streets.
We will find a good place for lunch. We start to experience river life in Bangladesh with a boat ride on the Buriganga River. Drive back to your hotel.
Overnight at Dhaka (Hotel Civic Inn)

We transfer early to the airport for the short 55-minute 07:15 flight to Chittagong, arriving in Chittagong at 8.10. We drive to Rangamati (102 km, 3.5 Hrs).
We have a restful and peaceful day aboard of boat on Kaptai Lake. Before sunset, we visit a Buddhist temple.
Overnight at Rangamati (Parjatan Hotel)

Visit the tribal markets in Rangamati as per market-day. Stroll into the village to visit Chakma and Tripura aboriginal village to explore their lifestyle and culture!
Visiting some tribal handicraft markets in the evening is also on the card.
Overnight at Rangamati (Parjatan Hotel)

We Drive to Bandarban after breakfast (82 km, 3.5 Hrs), and visit a small tribal museum en route. We visit the Golden Temple, Nilachal, a place with a height of approximately 2800 feet from sea level, and other popular tourist sites in Bandarban the rest of the day. To reach Golden Temple, you need to climb paved steps up 200ft.
Overnight at Bandarban (Hillside Resort)

Visiting villages of different tribes in the morning to see their lifestyle. You can see the hand-made clothes that they use for them, and also can buy some from tiny outlets directly run by the tribal people, which will be big support for them.
Boat ride at beautiful Sangu River in the evening. To note, Sangu is the most naturally beautiful river in Bangladesh.
Overnight at Bandarban (Hillside Resort)

We drive back down from the hills to the coast and Chittagong Ship Breaking Yard (103 km, 4 hrs) after breakfast. This is a graveyard of the giant commercial scrap vessels brought here from all over the world, to be dismantled and converted to pieces of steel here. We’ll visit ship-breaking activities by boat for a couple of hours. We’ll also visit shops of scrap materials coming from those ships, good places to collect unusual souvenirs. If time permits, we will visit the Commonwealth World War II – Chittagong War Cemetery
We drive to Chittagong airport (40 km, 1.5 hrs), and fly to Dhaka on the 16.20 flight, arriving in Dhaka around 17.15.
Overnight at Dhaka (Hotel Civic Inn)

Pick you up from your hotel, transfer you to the airport according to your flight schedule and say goodbye.
End the Exploring Chittagong Hill Tracts Tour. 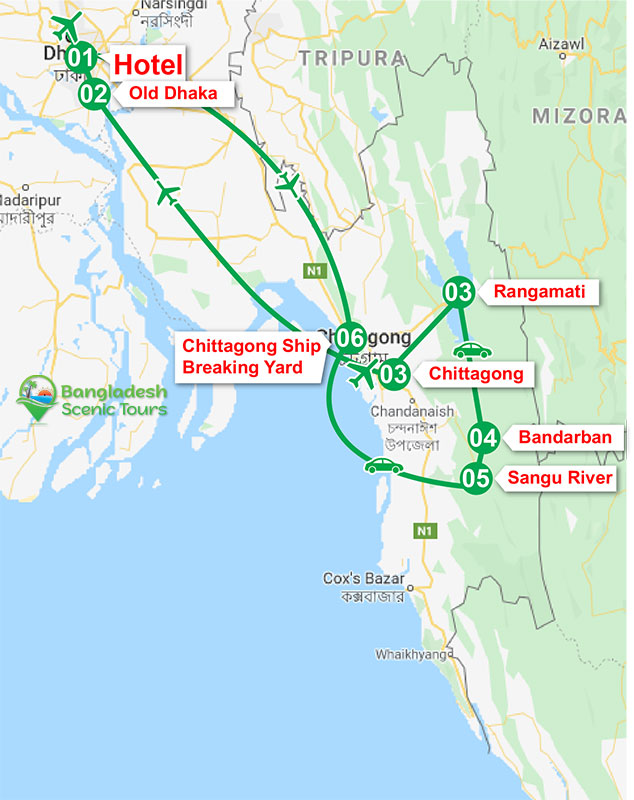